Why brew a beer infused with cannabis? There are plenty of reasons you might want to do it—novelty, an aversion to other consumption methods of cannabis (for nonsmokers), self-medication, or the challenge of trying something new and pushing boundaries in the use of a less-understood brewing ingredient. No matter what your reason, the wave of legalization and decriminalization of cannabis for both medical and recreational use in the United States, Canada, and more has led to a rise in interest in brewing with the close cousin of hops.

First question—what style to brew? Most cannabis strains have a pungent aroma and need a beer with various strong components—body, aroma, alcohol—that allow you as the brewer to balance those flavor and aroma contributions. As such, a New England–style Double IPA recipe is a great match with the use of marijuana in the dry-hopping process.

Use one of your favorite double IPA recipes. Cannabis is alcohol soluble at an ABV of 8 percent or higher, so stick with the double IPA over a lighter single IPA—the higher the alcohol content, the better the THC extraction, and with high-quality recreational marijuana from a legal dispensary running roughly fifteen times more expensive than an equivalent amount of hops from a homebrew store, extraction efficiency is definitely an important concern.

Additionally, the higher finishing gravity of a double IPA will let you counteract some of the herbal bitterness that cannabis can add, and balancing with fruit-forward hops will aid general drinkability.

The basics: How beer is made

After the wort has boiled and cooled, it is transferred to fermenters to allow the sugars to transmute into alcohol (The Rocketeer) Simply put, the process of brewing beer involves taking a starchy source material (typically a cereal grain such as barley), converting this source into a sugary substance known as wort, and fermenting the sugary wort until the sugars (at least partially) turn to alcohol. The fermentation process is affected by the addition of yeast, which produces enzymes that convert sugars into ethanol.

In the initial stage of the process, crushed, malted cereal grains (known as ‘grist’) are mashed with hot water (known to brewers as ‘liquor’) in a large container known as a mash tun. Malted grains are germinated by immersion in water, but are prevented from germinating fully by exposing them to hot air.

The malting process triggers the development of enzymes required to transform the starches into sugars. After 1-2 hours of ‘mashing’, the starches are mostly converted to sugars, and the water (which now contains the dissolved sugars) is filtered off. This mixture of water and dissolved sugars is the wort. 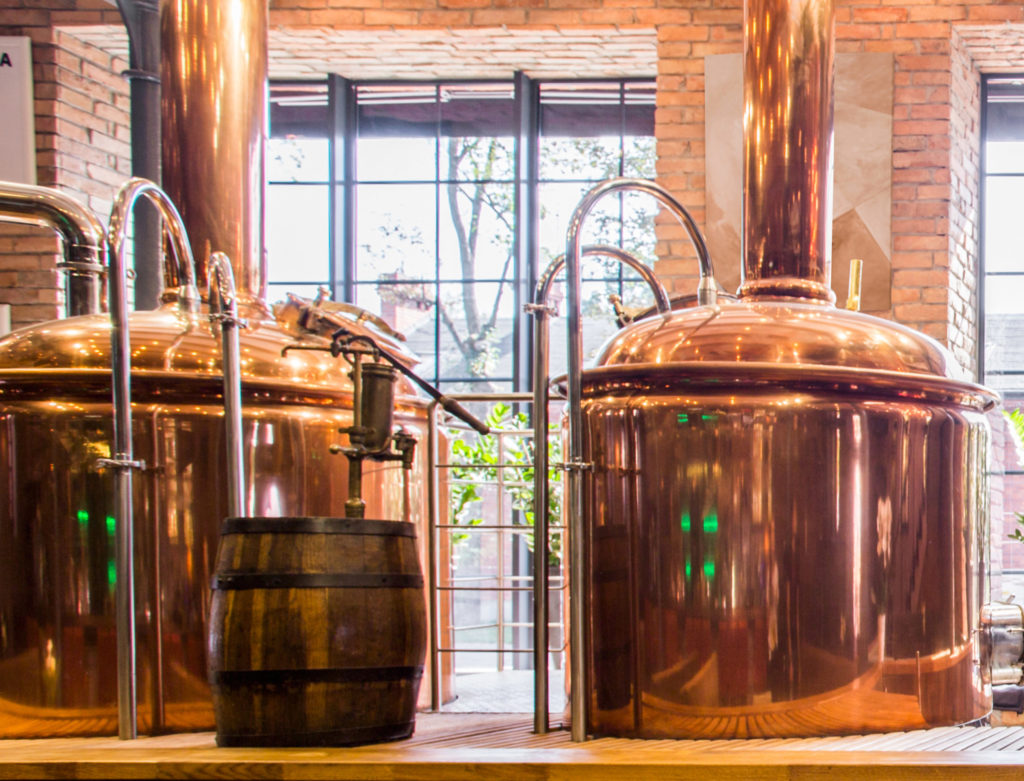 Next, the wort is placed into a kettle (traditionally copper) and boiled for around one hour. This allows the water to evaporate off and the sugars to become concentrated. This stage also ensures that residual enzymes left over from the mashing stage are destroyed.

During the boiling stage, hops are added to the kettle. This may occur at any point during the boil, and may be repeated once or more at various stages. The hops impart bitterness, fragrance and flavour to the brew: the longer they boil, the more bitter the end result, but flavour and fragrance is sacrificed. Once hops are added to the mixture, it is known as ‘hopped wort’.

After boiling, the hopped wort is cooled and placed in a large vat known as a fermenter, and yeast is introduced. Thus, the process of fermentation can begin. The process may take as little as a week, or as long as several months, depending on the variety of yeast used and the alcohol content of the end result.

The beer is often fermented more than once, in a series of two or more fermenters. As well as converting the sugars present into ethanol, the process allows the fine particulate matter held in suspension to settle. Once fermentation is complete, the yeast also settles, so that the end product is clear.

After the fermentation process is complete, more sugar is added to the brew; the leftover yeast remaining in the beer begins to react with it, releasing bubbles of carbon dioxide—the source of the carbonation in fizzy drinks. This stage of the brewing process is known as ‘priming’ or ‘conditioning’, and is usually the final process performed prior to bottling.

After the sugar is added, the brew is left for around a week to allow the majority of the carbonation to dissipate—otherwise, if bottled too early, excess carbonation could cause pressure to build up and bottles to distort or burst. Hops in its natural state has an aroma and flavor which have long been compared to that of pot. Hops is used in the beer brewing process to enrich the beer’s flavor, but it also provides stability to the brewing process itself. While other items can and have been used hops is the most common, popular choice. Hops also possess antibacterial characteristics which let the yeast do its job freely, and beer made with hops doesn’t go bad as quickly either.

Pot and hops have a lot in common, one specific trait being that both plants separate and develop into male and female plants. Since the presence of seeds is undesirable in most all cases when it comes to the use of either plant, the female plant is the one used in making beer among other things. While a number of various agents can be used for flavoring and stability, hops is the most well-known and used, but cannabis does an incredible job.

If you are already a brewer making pot beer is an easy proposition. When proceeding through your beer-brewing steps you are going to replace the hops with your marijuana. Active home-brewers have different advice and perspectives regarding the addition of the weed to the brewing process since different styles and methodology vary from brewer to brewer. Over the years many have tinkered with trying to accomplish the perfect recipe and the result have been varied the world over. Below are some suggestions regarding the actual addition of the pot to the brew and when the right time to do that may be:

Most brewers agree on this point. There are going to be substances naturally found in marijuana which are less than desirable, and then there will be outside toxins which have cleaved to the plant. Soaking will loosen and dissipate much of these.

While there are brewers who claim this robs the needed terpenes from the plant but others stand by adding your pot as soon as the wort is taken off the heat because you get the most THC and the best flavor.

This is referred to in traditional beer-brewing as ‘dry-hopping’ and may will provide even better flavor, some say.

While there are different methods of brewing pot beer brewers seem to agree that the weed should only be added once fermentation is completely finished. This ensures that the sugars have all been successfully converted to the ethanol alcohol which is the goal. While you can find a number of delicious weed beer products, if you are a home brewer who enjoys using weed creatively take advantage of this opportunity to perfect the perfect pot potable by experimenting and developing your own individual and uniquely flavored beverage today!