Even if you don’t smoke weed, you’ve probably heard of the munchies — that overpowering drive to eat all the snacks after smoking cannabis.

But others swear that smoking weed not only makes them eat less, but also causes them to lose weight.

Using cannabis may be associated with lower body weight, but it’s not as straightforward as it sounds.

Here’s a look at what we do and don’t know about the relationship between smoking cannabis and weight loss.

Does the research really link cannabis to weight loss?

Much of the talk around smoking weed for weight loss comes from a 2011 review of two surveys. The authors concluded that rates of obesity were higher among people who reported not using cannabis compared to rates among those who used cannabis at least 3 days per week.

Shortly before those results were published, a study examining the association between cannabis and obesity in young people made similar conclusions.

Most recently, a meta-analysis of the relationship between cannabis use and body mass index (BMI) showed that cannabis users had significantly lower BMIs and obesity rates but an increased calorie intake.

What’s the reasoning behind those study results?

Experts have a few theories on why cannabis use is linked to reduced BMI and lower chance of obesity.

It can increase mobility

When used properly, cannabis may relieve symptoms of pain and stiffness. This means that people with mobility issues may find that they can be more active when using cannabis.

It may cause some people to drink less

Some experts suspect that younger people who use cannabis may consume less alcohol than those who don’t. This means that they’re not taking in calories from alcoholic drinks, which could contribute to lower BMIs.

It can lower stress

Stress eating is a very real thing. Studies show that people are more likely to overeat and rely on comfort foods when stressed.

It’s no secret that weed can ease anxiety and help calm you when you’re feeling stressed. Some believe that this might replace stress eating for some people.

It may improve sleep 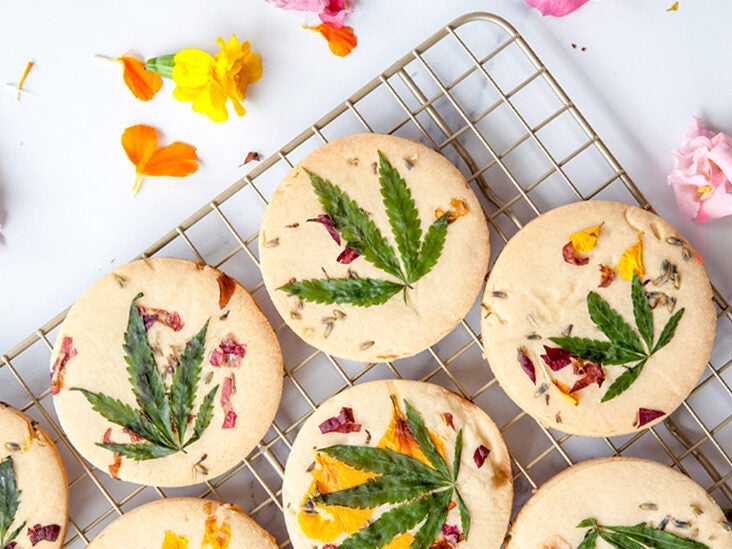 Poor sleep can be a factor in weight gain. There’s some evidence that cannabis may improve insomnia. Plus, it may help reduce stress and pain, two of the main culprits behind poor sleep.

THC may also improve the gut biome, which also affects weight. Obesity is linked to higher levels of a group of bacteria called Firmicutes, and lower of another, Bacteroidetes. In an animal study from the University of Calgary in Canada, obese mice on a high-calorie diet were given THC. Their gut bacteria levels normalized, and they stopped gaining weight.

Not everyone’s buying it. “The data that cannabis causes weight loss is not solid,” says Diana Martinez, a psychiatry professor at Columbia University Medical Center in New York. “There are animal studies, but the human research is based on self-reporting, so there’s no way to know how much they’re taking. To prove the theory requires a study that gives some people THC and others a placebo.”

Martinez is not necessarily anti-pot. She says it has treatment potential for debilitating conditions—like multiple sclerosis, chronic pain, and Crohn’s disease—that need more treatment options. But in the U.S., regulations governing THC in research need to loosen before large-scale human studies can happen.

Unless you live in a state where recreational marijuana is legal, this diet advice will be hard to follow. And since definitive science is lacking anyway, you’re not a buzzkill if you choose to stick with a good diet and exercise.

THC seems to bump metabolism over time, so even if there’s an initial hit of the munchies, the metabolism boost compensates—and then some. “And if modern strains have lost the munchie effects, but increased metabolic rates remain, I would think the effects of reducing obesity would be even greater,” Clark says.

And you don’t have to be a frequent smoker to lose pounds. A one-time user bumps his metabolism for up to four weeks, so getting high a couple of times a month can get you noticeably trimmer, studies revealed.

The exact dose needed is unclear, but THC is a must, as opposed to its more widely legal, nonpsychoactive counterpart cannabidiol (CBD). The thinking goes that our modern American diet is too high in omega-6 fatty acids, which come from sources like vegetable oil and butter. In excess, omega-6 can cause inflammation in the body. It also overstimulates a receptor called CB1R, which causes increased hunger and makes food taste better, decreases metabolic rates, and encourages fat storage. THC is able to “talk” to the CB1R receptor and help restore homeostasis, Clark says. In other words, it may help reduce hunger and weight gain.

At first glance, the research might seem to suggest that smoking weed is a good way to lose weight. But there’s no evidence that using cannabis directly causes weight loss.

It might contribute indirectly by helping with certain issues, including chronic pain and poor sleep, that can contribute to higher body weight.

Plus, using cannabis isn’t without risks, especially if you smoke it.

Cannabis smoke contains many of the same irritants, toxins, and cancer-causing agents as tobacco smoke, according to the American Lung Association.

And because weed-smokers inhale more deeply and hold the smoke in longer, they’re exposed to more tar per breath than cigarette smokers.

Over time, smoking weed damages your lungs and airways, reducing respiratory function and increasing your risk for airway inflammation and chronic bronchitis.

Then there’s the issue of misuse and dependence. Up to 30 percent of users may have some degree of cannabis use disorder, according to a report from 2013. Younger people are especially at risk, particularly people who use cannabis before the age of 18.